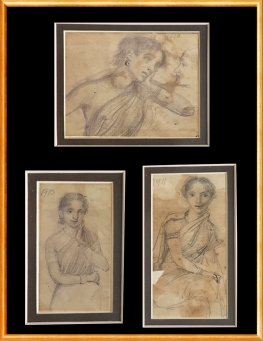 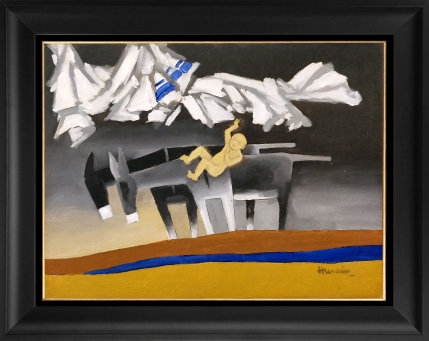 The New Year Sale exhibition at Gallery 7 offers a collection that reflects the keen eye of a gallerist who has spent over four decades in promoting and showcasing some of the best names in the art world. It reflects a discerning yet eclectic aesthetics and offers a montage of Indian art through the past 150 years. It is, then, an opportunity for us to view the original works of a whole (I’m almost tempted to say, ‘pantheon’) representative sweep of Indian art as it evolved from the early twentieth century to the present. Names we have heard, artworks we have seen in pictures but now have occasion to see in the original. Additionally, if it will tempt you, the gallery is offering these works at rather generous discounted prices ranging from 25 to 75 per cent of market price.

It is impossible to describe 100 works by 50 masters in the space of a column. Instead, I give you my own personal ‘wish-list’ from the show:
On display is a set of ink drawings by F N Souza, one of the founding members of The Progressive Group, which are exquisite suggesting as they do the tension within the man-woman relationship and an impatience with the quotidian. These demonstrate how restraint and an economy of line can still result in such a powerful statement.

Bikash Bhattacharjee’s mix media painting Doll is sinister and disturbing. This is from his subversive Doll Series which were in response to the violence, disquiet and turbulence that could not have escaped anyone living in Bengal in the early ’70s. As in all of Bikash’s works, these paintings too are rich with suggestion, strong yet nuanced and offer multiple narratives that draw the viewer into its vortex.

Several works by the artist, printmaker and sculptor Somnath Hore are on show. Hore is known for his works that were a reaction to the severe times that he witnessed in Bengal during the first half of the 20th century, namely, the Bengal famine of 1943 and the Tebhaga movement. I saw at least four drawings in ink by Hore, one (untitled) suggesting figures inalienably tied to their land and their plough and then two works on ecru paper that has ‘Runglee Rangliot, the legendary Darjeeling tea, nothing else is quite the same’ printed on it. On this paper, then, is a drawing of a defeated figure slumped at a table on which stands an empty glass and an overturned bottle and the other is a skeletal vendor with a beedi between his fingers squatting with an empty basket behind him. The irony cannot be missed and this itself is that which makes these two drawings particularly distressing and poignant.

M V Dhurandhar was a prominent painter during the British era. Apart from mythological themes, he also depicted women captured during their quotidian occupations. A set of three small format pencil drawings from this artist is on offer and make for a beautiful vintage montage of that period framed as they are in a single frame. These are dated around 1910-11.

Then, of course, there are several works from Husain. Particularly, an oil on board, Baby Jesus and two Donkeys from his Mother Teresa Series and a mix media work in shades of copper and black called Cyprus-Ten which is rich with symbolism and vivacity.

Anjali Purohit is a writer, painter, poet, translator and conceptual vagabond with a yen for gadding about town.

The Column in the ADC48hrs can be viewed here – http://www.afternoondc.in/48-hrs/a-montage-of-masterpieces/article_221215

One thought on “The Art Column: April 20th 2018: A Montage of Masterpieces”