Skip to content
Home > 48 Hrs > The Smell Of Pepper And Jasmine
This is the first of a fortnightly column in the newspaper Afternoon Despatch & Courier. I will be posting reviews of art shows in town –

The Smell Of Pepper And Jasmine 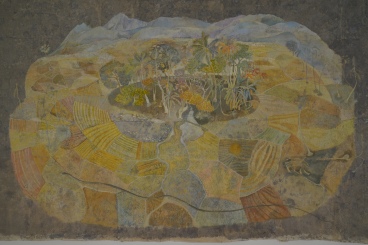 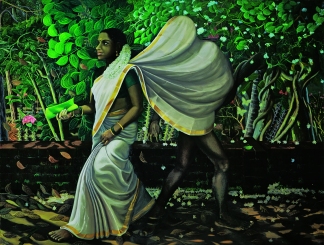 Nine painters from Kerala come together to showcase the shared locality of their artistic practice and highlight their own individual preoccupations and styles. Anjali Purohit visits the exhibition

In the frantic pace of metropolitan living there is often a wish to escape to a place that will offer some respite from the blinding reflections in the glass-chrome-concrete monolithic ideal that our city is racing towards. That is when thoughts turn to the cool, green, salubrious surrounds of, where else but, the abundance of god’s own country. Till such time as one can plan a trip there-wards, however, we have Galerie Mirchandani + Steinruecke that brings the lush abundance of that state to Colaba in the form of the show Nine Painters from Kerala.

These are nine painters who have had a longstanding association with the gallery but are being shown together for the first time with the belief that the exhibition will evidence the shared locality of their artistic practice as well as highlight their own individual preoccupations and styles. The artists, Abul Hisham, Aji V.N., Arun K.S., C.K. Rajan, Jyothi Basu, Ratheesh T., Siji Krishnan, Sosa Joseph and Vinod Balak hold dialogue with each other through their work which also demonstrates their rootedness in the land from which these works arise—the culture and milieu of Kerala. The paintings on display begin to offer, by the way of complement and contrast, a vivid montage of the land in which they are grounded but then further take off from this point to express their own preoccupations with themes such as social structures, self, family, untamed nature, alienation, desire, death, urban realities and politics.

Rateesh T offer us a large work, The Smell of Pepper and Jasmine, which is a heady and immediately visceral one exuding as it does not only the smell of jasmine and pepper but also of the wet earth, of desire and fecundity. It is, I think, one of the strongest images that stays in one’s consciousness for quite a while.

Vinod Balak is equally powerful with his canvas, Last Supper, where he makes an arresting statement that depicts a ‘last supper’ with local political figures but which could well be situated in any other space in the nation. The figures are typically ranged around a table that holds empty plates and an enormous, ripe jackfruit just waiting to be cut opened and consumed.

Sosa Joseph’s art engages with the complex cultural mix of people in society, specifically her own native Mattancherry perhaps suggesting the intricate warp and weft of social relations that ought not to be rent.

Siji Krishnan presents a fascinating landscape depicted in washes of water colour on rice paper reminiscent of ancient parchment rolls. The colours in Snake Crosses the Landscape are soft, soothing, pastel. Here, an almost perfect and subtle landscape of rice fields peacefully coexisting with each other, of waterways and gently undulating mountains is disrupted by a snake crossing across almost end to end from the right to the left in the foreground. Dangerous or benign? As always with fine works of art, it is best this is left as an open question for the viewer to engage with.

This exhibition is surely one that must not be missed since these individual painters might have solo shows in the future, but the pleasure in ‘listening’ to these paintings hold a conversation with each other about a love that is shared for their land, is an opportunity that might not come again anytime soon.

Do also immerse yourself in the current exhibition at the National Gallery of Modern Art (across the road from the CSMVS Museum) where Art & Soul Gallery has curated an important retrospective exhibition of over 150 works by the legendary artist, Manu Parekh. Taken together, this show offers a comprehensive viewing of his over sixty years of extensive artistic practice and the depth, diversity and significance of his art. This exhibition will run till the 15th of April.

Anjali Purohit is a writer, painter, poet, translator and conceptual vagabond with a yen for gadding about town.

One thought on “The Art Column: April 6th: The Smell of Pepper and Jasmine”